A Hot Mess of a Day

Omg. It has really been one of those days.  Last night I had a pretty sever asthma attack but I thought I would be fine if I just got some sleep.  Mind you, I haven't had an asthma attack since I was 15 so I thought, "Eh, just wait it out.  You'll be fine"... Eh Eh.  Didn't happen.  Yesterday, I spent all morning bleaching, windexing, and washing all the things in my house so that we could finally move out and be done.  I think all the chemicals took a toll on me.  I immediately started feeling tight and congested, but I am always tight and congested so I thought it was no big deal. Then we spent the evening with our theatre friends and there were a total of four dogs running around.  Notice the recipe for disaster that was happening in my chest; first chemicals, then hair.  Not to mention all the damn stress I've been under trying to sell this damn car and get everything taken care of on the home front.  Last night, once we got back to the hotel, the tightness turned into total constriction.

So I went to bed.

But after I woke up sounds like Weezy from Good Times, Rob said "Now can we go to the ER".  So I went.  I had to have not 1, not 2 but THREEEEE chest treatments before the rightness would budge.  I could barely talk in complete sentences.  Yuck.  So now I have a bright and shiny new inhaler, flo-nase, the breath-into-it-and-see-how-strong-your-breath-is thing, and my least favorite of all, the prednisone steroid.  At least I only have to take it for 5 days.  I know for a fact, that it can blow you the hell up.  And yes, I do think I would sacrifice breathing in order to not gain weight.  So what. 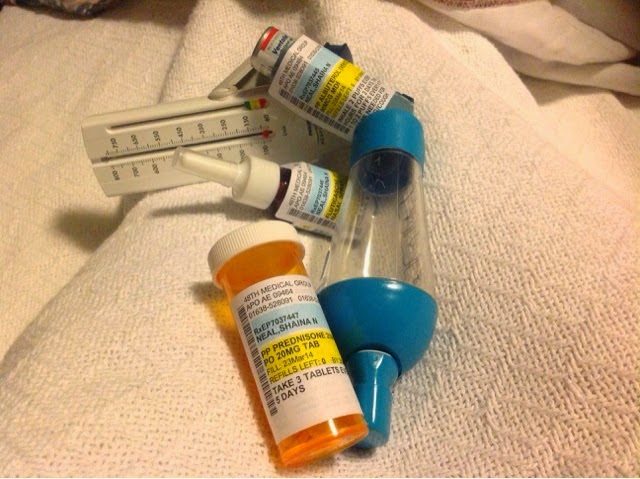 After all that, I was out of the hospital at 9 am and since I didn't sleep so well I decided to take a nap.  I hate naps, I always wake up feeling worse than I did before I went to sleep.

At 3 it was time to go to play practice (where I was until 10 pm this evening.  Yep 7 hours of rehearsal), and there I put on quite the show.  One of the dresses we have to wear is SUPER tight right in my midsection.  My least favorite part of my entire body.  With my chest being tight and my breathing so short, my normal habit of sucking my stomach in until I am seconds from passing out, was impossible.  So there I was, breathing shallow, trying to dance, and wearing the tightest sequin dress in the world.  And once I found out I had to have on a mic for the whole show...I was like F*&^ this S#$^.  That mic just added an extra bulge to the whole damn thing.

I felt it happening.  I looked down at the dress and my 5 in heels, the mic, and I just couldn't breathe.  I was literally gasping for air.  Then the tears came.  Like a little pre-madonna cry baby.  Then they came even harder because I could NOT believe that I, Shaina, was feeling this self conscious about my body.  After looking like a complete idiot, I had to sit down and get myself together.  20 minutes passed and I refused to sit there like a bumbling fool.  I put on my big girl panties, jumped back on stage, and put on that damn dress.  If anyone is going to have a problem with my body, it most certainly will NOT be me.

I still felt like crap, but I joined in and did the rest of the show with everyone else- at an easy pace of course.  As a complete side note, I really can't say enough about my theater babies.  Everyone was so considerate and trying to take care of little ole me.  Its nice to feel so safe that you can have a complete meltdown and not worry that everyone will think you're a prat! Tomorrow, I buy some tights, fake spanx, and some hotpants.
Posted by Nairobi Nicole at 4:21 AM